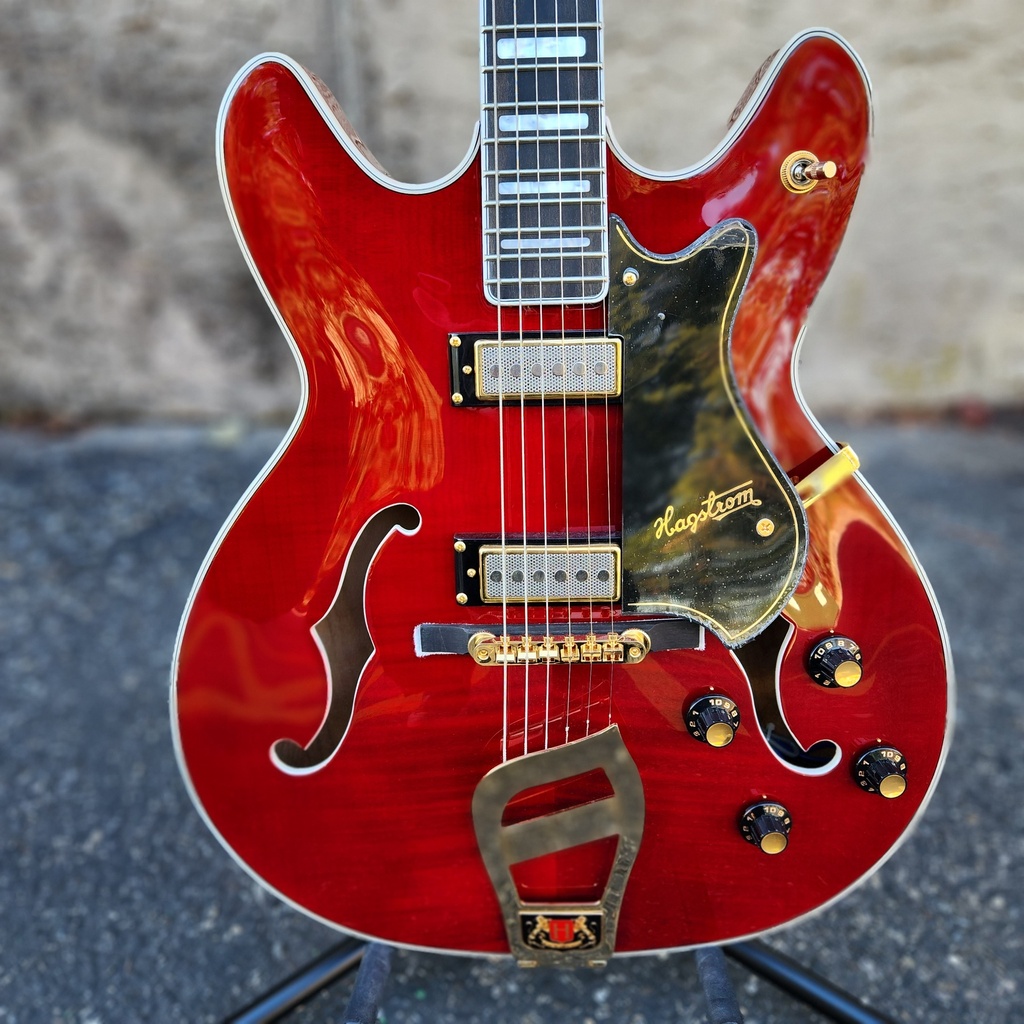 The Hagstrom Viking® saw the first light of day back in 1965, and became quickly one of the most popular Hagstrom models which continued in production until 1979. Since Hagstrom’s international return to the market in 2004, the Viking® has made new conquests around the world and has become one of our most popular models with its amazing tone, ease of playability and ravishingly appealing looks.

Now Hagstrom turns back time and rediscovers the 1967 Viking® II as it was originally produced during this distinct era of rock 'n' roll history. The Swedish pathfinder has influenced the music world (and pop culture itself) by becoming so broadly recognized within international television, media and in the hands of some of music’s biggest legends and forefathers of rock 'n' roll.

The new Hagstrom ’67 Viking® II equipped with its hollow-body slim lined flame maple ply body, is adjoined to a 6-in-line, bolt-on Canadian maple neck. The new specially developed dual coiled Hagstrom Mini-Humbucking pickups will bring players back to the golden age of rock/pop music, with the introduction of the newly developed Hagstrom “H-52” Mini Humbucker pickups. The same classic vibe from the 60’s originals, fused together with modern day technology for a classic and punchy humbucker tone or in splitable single coil mode, providing players with complete tonal flexibility.

Gold hardware and details tastefully adorn the instrument where players can’t help falling in love all over again, with this legendary instrument as we bring this ‘67 classic back from days of yesteryear. All Hagstrom electric guitars and basses include our patented H-Expander™ truss rod. Providing tension at both ends and running the entire length of the neck, the rigid yet light-weight alloy truss rod allows for a very low action and thin neck, two factors that were instrumental in earning Hagstrom its reputation as the world’s fastest playing guitar. The H-Expander™ truss rod not only provides ultimate neck stability, but it also contributes to Hagstrom’s unique tone.  Longer sustain and a round attack are some of the sonic characteristics the H-Expander™ adds to the tonal essence of Hagstrom. Resinator™ wood is a wood composite material that is both more uniform in density and more stable than any standard wood product. These characteristics eliminate dead spots or “wolf tones” sometimes associated with conventional wood fingerboards. Resinator™ wood has an articulate sound similar to high quality ebony, but without any of the problems associated with ebony. It provides a stable and clear tone, and also adds higher overtones and harmonics which uniquely detail each note. Like our H-Expander™ truss rod, Resinator™ wood is a major contributor to the distinctive “Hagstrom tone”.